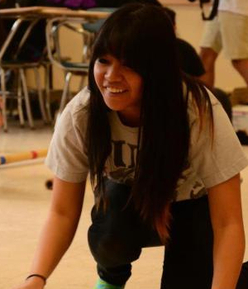 Major: Film/TV (COM ’16)
Hometown: Newark, CA
Favorite part about FSA: Dancing and random hangouts
Life goal: Start my own production company, win an oscar, save the world, the usual.
Fun fact: I almost majored in music and I can play 5 instruments. Oh and I’m also a member of Delta Kappa Alpha.

Christine Kelly is a sunior studying Film/TV in COM. We say “sunior” because she is a junior/senior. She’s probably going to graduate early in 2015 but we’re not sure. Plot twist: she’s not sure either. Also, Christine is special because she’s BUFSA’s first ever Media Specialist/Historian and hopes to make the most out of the position. Last year, she was Internal Affairs Representative! She’s pretty busy with school and BUFSA, but you’ll probably catch her filming her next masterpiece somewhere on campus. Say hi! She doesn’t bite. And despite her last name, she’s full Filipino and proud of it!